Me and Rose Will Keep You Safe 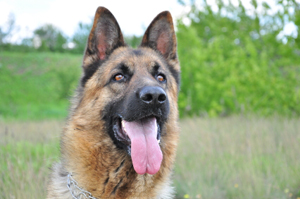 Yanno, when me and Rose hear a noise outside that we don’t like we let everybody know. I mean everybody. See Rose barks and I howl. No really I hooooowwwwwlllll. Brian, my two-legged companion says it sounds pretty. And I guess to someone who doesn’t hear as good as I do it probably does. But I’m not hoooowwwwlllliiiinnnngggg because it’s pretty I’m telling that stranger to go away.

But I hafta tell you that me and Rose are really friendly and wouldn’t do nothing to anybody that came to the door. Well, unless the person was wearing a hat. I don’t like hats. Nuthing should be on a person’s head except their hair. I once barked at Dee, my other two-legged companion for coming down the stairs after she had a shower because she wrapped her head in a towel. Anyways.

So what if you need a dog for protection? Well you gotta get one that’s trained. You could train him yourself but it’s not easy. Nope not easy. The answer is to find a dog from a company like Chaperone K9. Make sure that the dogs are trained using positive reinforcement. That means when the dog does what the trainer wants, the dog is told he’s a good boy or gets a treat or extra lovies. What you don’t want are dogs that are punished when they don’t do what they’re asked for correctly. That’s a bad way to train because the dog expects to be treated badly and gets scared. Scared dogs can’t be protection dogs.

Okay, so what else do you look for when you want a dog to protect your family? Well you want the dog to be happy with all sorts of people like kids and babies and old people and noisy people. So the training has to include all those types of people. I mean if the dog hasn’t ever seen a baby they won’t know what it is or what to do with it.

You also want the dog to do what you tell it to — right away — like now — like this very minute. See Rose doesn’t do that so well. If you tell her to sit, she will when she’s ready. Protection dogs have to do it right away. The dog has to know what to do if somebody bad like a thief comes into the house, or that person looks like it’s going to hurt his two-legged companion.

Here’s the part where you really really really need training. If someone comes at you, the protection dog gets between you and the attacker. Rose did that with Brian and the rattlesnake. See the rattlesnake was going to bite Brian and Rose kept pushing Brian away so the snake bit Rose instead. Big Owie. She got really really sick. But see that’s what we’ll do for out two-legged companions.

If the bad guy won’t go away after the protection dog tells him to by barking and showing his teeth, then the dog will try to chase the bad guy by lunging at him. And if that doesn’t work and you tell your protection dog to do it, he’ll bite and hold on until you tell him to release.

It’s not easy being a personal protection dog. It’s a big job, but I bet they feel really good about keeping their family safe.

Rose the Cute One.

This entry was posted in Kate posts. Bookmark the permalink.