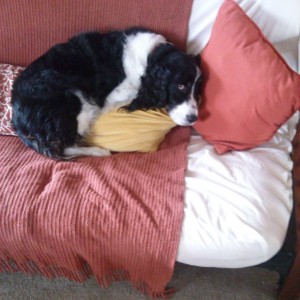 Two-legged companions, humans, or peoples — whatever you call them have to be trained. Rose, my Irish setter sister, and me, Kate, the English springer spaniel have put together some tips to let them know what we want.

Begin With Breakfast
To get breakfast you hafta to get humans awake in the morning and let them know that it’s been hours and hours and hours — like a really long time since dinner. I like to jump on the bed, then jump off. Jump on the bed then jump off. If that doesn’t work I put my nose up right against my two-legged companion’s nose and breath, sometimes I actually touch noses.

Rose has a different method, she rubs against the bed. See, she’s big so when she rubs the bed, it shakes. Usually that works in just a few minutes. Our human sometimes says “Rose, Kate, it’s too early to get up, go nite nite,” but we don’t wanna go nite nite, we want to get uppie, uppie. So we use the double attack method. I jump on and off the bed while Rose puts her paw on one of their heads. That does the trick.

Focus Peoples Focus
Now that they’re out of bed, you have to teach them that there’s two things that come first, go potty and then breakfast. Teaching them you have to go potty before they do anything else is easy. One or two “accidents” and they learn real fast.

Getting our breakfast before they make coffee, get the paper or anything else, requires the herding method. You come back inside after the potty break and then walk right next to them. If they go anywhere except to get your breakfast you nudge them right back to the kitchen. Rose and I could win a contest for herding and we’re in the sporting group.

Oh, if they try to keep you outside instead of letting you right back in after your potty break, barking works. Rose sometimes taps her paws on the glass door, it makes a noise that our two-legged companions don’t seem to like. It’s kinda high-pitched.

This entry was posted in Kate posts, Uncategorized. Bookmark the permalink.