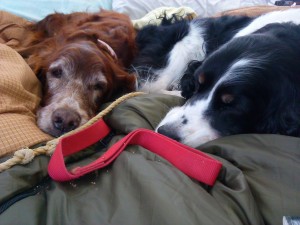 When we’re camping I like to say hello to the other campers — the two-legged campers. Sometimes those campers bring their four-legged companions with them. It’s funny because it seems like the bigger the RV — yanno those big huge metal thingies that hook onto the back of a truck and you stay inside it at night instead of staying in a tent like we do. Anyways, it seems the bigger the RV, the littler the four-legged companions are.

There was this one RV that was humongous and in the front on the ground were four little itty bitty yorkies. They were inside a fence like a playpen. I could have knocked over the fence really easy but those little guys just stayed inside it and yapped. And yapped. And yapped.

I dunno why little dogs make so much noise. Maybe it’s because they’re afraid they are so little somebody will step on them. Next time I see a little yappy dog I’ll ask.

This entry was posted in Rose posts. Bookmark the permalink.