We had lots of fun on our first camping trip in the desert — even though the tent was almost blown over in a windstorm — with me sitting inside the tent on the air mattress. I really don’t like it when my afternoon nap is interrupted.

So this week my two-legged companions took us on a camping trip to a place in Arizona called Rose’s Velt Lake. Actually, it’s called Roosevelt Lake, after Theodore Roosevelt, who I’m told was a President of these United States. Since we drove for a long time to get to the lake — it seemed to take forever — I went ahead and re-named it after me. As Brian often says, “It’s Rose’s world, we just get to live in it.” Well said, Brian. 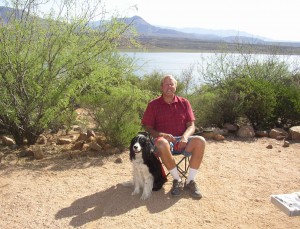 Brian and Kate relaxing in the sun.

As always, I was a good girl on the trip but Kate the Springer Spaniel — that’s another story. She kept trying to escape the tent and run out into the desert to explore. Not too smart. There are coyotes out there — we heard them howling every night — and also rattlesnakes. And anyways, our food is in the tent, so why would I want to leave? Sometimes Kate just doesn’t think things through. 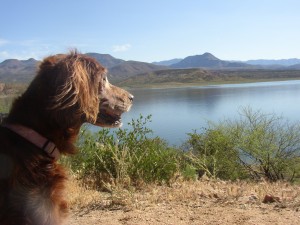 The lake was bee-utiful

Brian and Dee were thrilled that the campground had buildings with hot showers. They went on and on about it. This made no sense to me. Having a bath is nothing to celebrate. I hate, hate, hate bath day. Luckily, dogs weren’t allowed in the showers. This was one time I didn’t mind being left behind.

What really bugs me though is nice hotels that don’t allow two-legged companions to check in with their dogs. When was the last time you heard about a group of dogs getting drunk and trashing out their hotel room? All we dogs want is our food bowl filled 3 times a day and a nice soft bed to lie on at night. When you think about it, dogs are the ideal hotel guests. We don’t even ask for room with showers or bath tubs. In fact, when I go traveling I ask for a non-bathing room.

Rose, On the Road to Adventure in the American Southwest

This entry was posted in Uncategorized. Bookmark the permalink.