Danger in the Desert for Dogs: Rattlesnakes 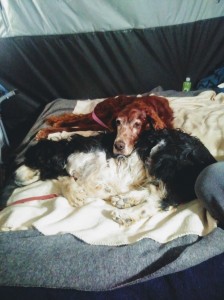 I got bit by a rattlesnake when I was young. It was my second summer. It was in the yard. We had a fenced yard but somehow it got in.

Brian was digging in the yard and I tried and tried to get him away from the snake but he wouldn’t listen. So the snake bit me instead of Brian. I saved Brian. I still get treats for that today even though it was a long time ago.
Now there are rattlesnakes in the desert. Most of the time you don’t see them or hear them. There is nothing that sounds like a rattlesnake.

When you’re out with your two-legged companion, keep them on the trail. Don’t go off into the bushes. Don’t put your nose where you can’t see like behind a rock. Snakes like to hide behind rocks when it gets hot because the rocks provide shade.

A couple more things. Rattlesnakes don’t always rattle before they strike. The one in our backyard didn’t rattle. Also rattlesnakes don’t hafta be coiled up to strike. They can strike more than half their length, which means if the snake is four feet long it can bite you up to two feet away. And it’s hard to tell how long a snake is when they’re all coiled up.

Some gopher snakes — I dunno why they call them gopher snakes, I mean do they like gopher pizza, or gopher a walk — look sort like rattlesnakes. Rattlesnakes have eyes with slit pupils and gopher snakes have round pupils. Yeah, like I’m gonna look a snake right in the eyes to see if its poisonous. No way.

Always be careful for snakes in the desert.

This entry was posted in Rose posts. Bookmark the permalink.